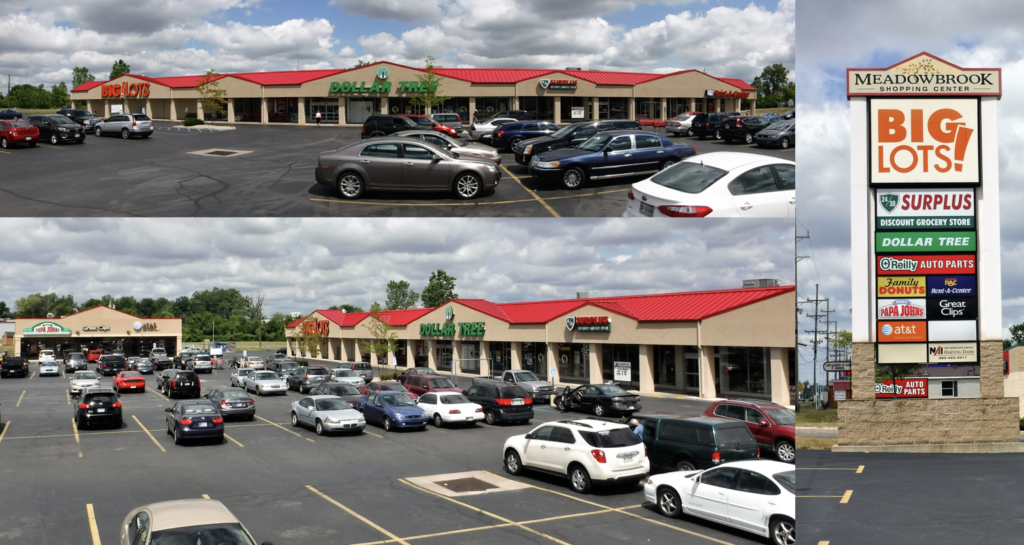 The Challenge
Located in a bedroom community of Fort Wayne, Indiana, this property was a former single-tenant department store that had languished in various states of vacancy and disrepair for the previous ten years.

Opportunity Identified
Capstone saw opportunity in the property’s strong lease-up potential and its prime location, which included more than 800 feet of direct frontage on the major retail thoroughfare of the area. In addition, the property had substantial developable land which could potentially increase the size of the shopping center by 70%.

Results for Capstone Investors:
Capstone acquired the property with the objective of maximizing its long term cash flow through a three-stage redevelopment process. First, Capstone hired local contractors to renovate the existing main building while tenants were signed on. Next, the additional land was developed with a goal of attracting maximum traffic and enhancing the image and resale value of the center. Finally, Capstone engaged area leasing brokers and management professionals to reposition the property as a discount shopping center.

The former tenant of this Bristol, Tennessee property was a department store that had declared bankruptcy, leaving the premises vacant for an extended period and in need of substantial repair and investment.  Local investors viewed the property unfavorably due to its close proximity to the State of Virginia, which carries a lower sales tax.
Opportunity Identified
Capstone’s interest in the property was based on two key factors: the substantial unrealized value of the land, and the property’s location, which included direct frontage on two major traffic arteries.
Results for Capstone Investors:
Capstone acquired the property and met with real estate brokers, lenders and local contractors to devise a plan to make renovations, maximize the property’s cash flow, and increase its long-term economic value.  To raise the capital needed to repair the main property, install a new roof and HVAC units, and make cosmetic improvements, Capstone quickly sold two prime outparcels.  A former storage area in the back of the building was then converted to individual retail spaces with direct road frontage and parking, resulting in a 25% increase in the property’s retail square footage.  Capstone utilized its database of national and regional retail tenants operating in the area to market the property as a multi-tenant discount shopping center.  After intensive marketing, Big Lots Inc. signed on to become the anchor tenant.  Subsequent national and local tenants were found and another outparcel was sold.
Based on increasing operating income, the Bristol, TN shopping center has been refinanced three times, returning capital to Capstone’s investors.

This property was formerly occupied by a Kmart department store that had closed operations.  Kmart had sub-leased the space to two regional sub-tenants, Hastings Entertainment, Inc. and Orscheln Farm & Home, on short-term leases, but remained the responsible tenant under the lease.  The future viability of Kmart was in question due to the company’s deteriorating financial circumstances.  In addition, the property suffered from significant deferred maintenance and needed a new roof, HVAC units and parking lot.
Given the uncertainty of their tenancy status and the poor condition of the property, it was uncertain whether Hastings and Orscheln wanted to remain sub-tenants.  If Kmart declared bankruptcy or one or both sub-tenants vacated the property, the value of the already distressed property would have been severely diminished.
Opportunity Identified
In what was otherwise viewed as an undesirable situation, Capstone saw opportunity and substantial unrealized value stemming from two areas: the below-market rental rates paid by the sub-tenants and the strong retail location with additional developable land.  Capstone believed that these two factors afforded strong upside potential in the event that Kmart were to cancel its obligations in bankruptcy.  In addition, a risk premium would be realized if Kmart merely remained on the lease and continued to pay rent.
Results for Capstone Investors:
Capstone acquired the property at an advantageous price due to the uncertainty surrounding Kmart and the property’s physical condition.  Capstone quickly established a working relationship with officers at Kmart Corporation to keep apprised of their intentions for the property in the event of a corporate reorganization.  Capstone also initiated discussions with Hastings and Orscheln at both the local and corporate level to discover and to act on the needs of the sub-tenants and to reassure them so they would not vacate.
Capstone retained bankruptcy counsel to plan for a contingent bankruptcy filing by Kmart.  When Kmart declared bankruptcy and cancelled its lease, Capstone quickly purchased Kmart’s tenancy interests in the property, canceling the short-term sub-leases and executing new, more favorable long-term leases with Hastings and Orscheln at higher rents.  As a condition of executing the new leases, the tenants required, and landlord performed, all needed physical repairs and improvements to the property.
With a refinancing in 2004 and the center’s sale in 2007, Capstone’s investors realized a substantial profit on the property.